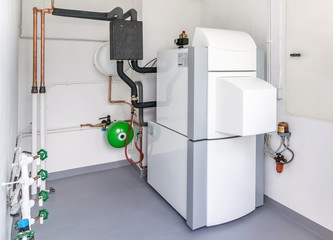 The condensing oil boiler, like its gas equivalent, recovers heat energy from the condensation of water vapor contained in the flue gas. This results in high efficiency of the device, but also forces the appropriate construction of the heating system.
The condensing oil boiler has an efficiency of less than 6% higher than its non-condensing equivalent. This is a value lower than in the case of gas (up to 11%), due to the smaller number of hydrogen atoms in the fuel molecules. Taking into consideration the ecological aspect, the condensation oil boiler, properly operated, ensures complete combustion of fuel. And the emitted flue gases are not a big environmental pollution.

Such a boiler is usually found in a standing version and is intended for installation in a boiler room.

It is equipped with a closed combustion chamber. This forces the air supply duct to be connected to the device from outside the room. This process can be accomplished by using a concentric flue-air system (where the flue flows through the internal pipe and outside air) or a separate air duct, passing through the room wall.

The oil for the boiler is supplied with oil lines from the tank. The tank and pipes should be placed in a heated room, in which the temperature does not drop below 10oC. As a result, we prevent the secretion of paraffin from the oil. If we do not have the option of placing the fuel storage in a warm place, the tank and lines will have to be heated most often electrically.

For transporting fuel, an oil pump is usually used. It provides the correct supply of oil to the burner. Its role is also to transport unused oil back to the fuel store.

Condensing oil boilers are usually equipped with fan burners. The oil is sprayed from the nozzles and then evaporated. Oil vapors are mixed with the supplied air, which causes them to be burnt. The best solution are two-stage burners, which allow better adjustment of the boiler’s power to the current demand of the building. There are devices with a built-in tank for domestic hot water.

The condensing oil boiler will work best with low temperature heating. Surface systems, in particular underfloor heating, operate with a supply temperature usually not exceeding 40 ° C. Which allows continuous use of the phenomenon of condensation. Another solution is a radiator installation with low flow and return temperatures. Then the radiators will be much larger, which will increase the investment costs. However, there is a high probability that the boiler will not use the phenomenon of condensation during the whole working time.

Condensing oil boilers are mainly used where there is no possibility of connecting the building to the natural gas network. Currently, heating systems used with fuel oil are more effective than before.

The main advantage of heating oil is easy availability, fuel oil contains small amounts of sulfur. It is virtually waste-free fuel, and during combustion, a small amount of harmful compounds. Thanks to this, it is an ecological fuel. Fuel oil has a high flash point which minimizes the risk of explosion. Therefore, the heating system can be installed inside the building, which is impossible when it comes to installations powered by liquid gas.

When making a decision about the purchase of a oil-fired heating boiler due to its high efficiency, we positively influence the protection of the natural environment. As a result of the condensation of combustion gases, additional heat is obtained, which is lost in traditional boilers. This allows you to get additional savings.

For such a solution, we can obtain co-financing from the “CLEAN AIR” program, which may cover the costs related to the purchase and installation of new boilers that meet the technical requirements.

Oil fuel boilers will have to meet, for space heating, the requirements of the energy efficiency class A minimum.

For existing buildings where the boiler / boilers for gaseous fuels or fuel oil put into circulation before 26/09/2015 are installed, they must meet, with regard to space heating, the highest energy efficiency determined by the 4-star symbol, according to Council Directive 92/42 / EEC of 21 May 1992.